skip to main | skip to sidebar

Paintings on View for December 2018

Bernadette Livingston Furniture Gallery at 39 Main Street, East Greenwich, RI, is hosting a three-artist show through the month of December 2018 which includes the remarkable  oil paintings  of Anne-marie Duboissett, Larry Rubin, and me.  In all I have 15 oils in the exhibit.  The background of fine and truly grand furniture serves as a fine setting for these painted gems.  Come to the  Champagne Reception this Saturday (December 15 ) from 5PM to 9!  Hope to see you there: and Happy Holidays to all!
Posted by tom martino at 2:44 PM No comments: 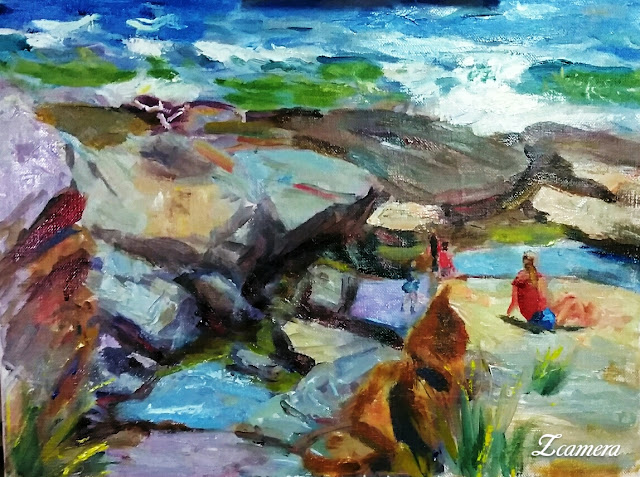 Shore Explorations, oil on linen, 11x14
The joy of painting at Beavertail is shown here.  When the tide allows, one can observe the residents of tidal pools, safe from the pounding breakers.
Posted by tom martino at 5:50 PM 1 comment: 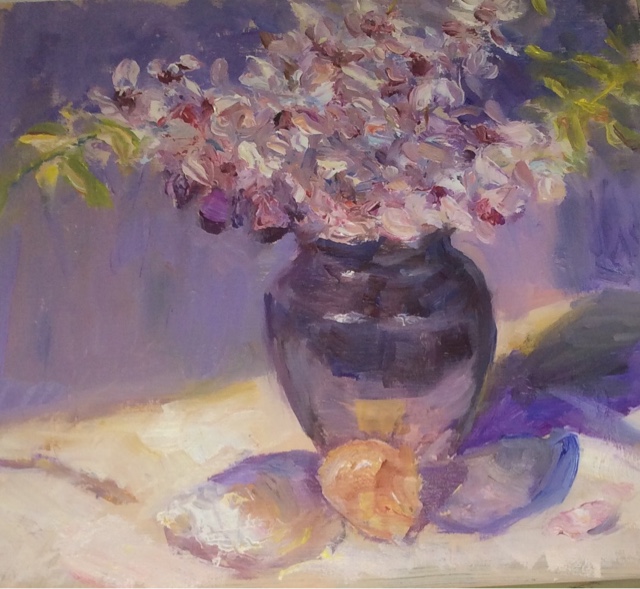 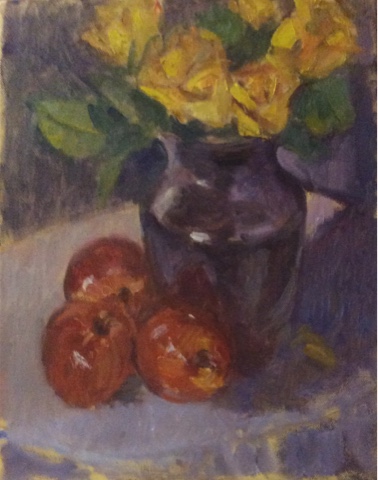 These are some examples of still-life practice I had done during the depths of winter.  Incidentally, I had already composed a post about typical winter practice for this plein air painter, but somehow I guess I hadn't enabled the post to publish.  So here's another attempt. 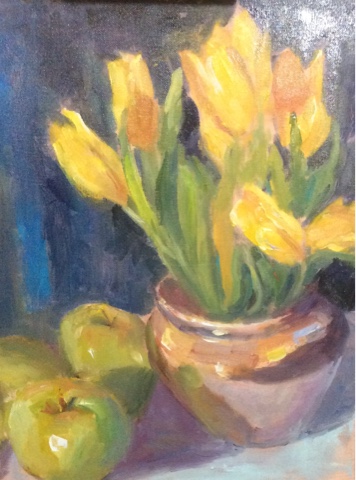 A daffodil had popped up outside my door--and later snatched up by a neighbor.  So these are from a local florist.  I like the pairing of fruit and flowers.
I should add that the still life's and portraits are painted ala Prima--I.e., directly in the space of 2 or 3 hours.  I mention this as a "plug" for a course I am about to teach at the South County Art Association in Kingston, RI.  The course will explore several fun ways of painting in ala Prima spontaneity. 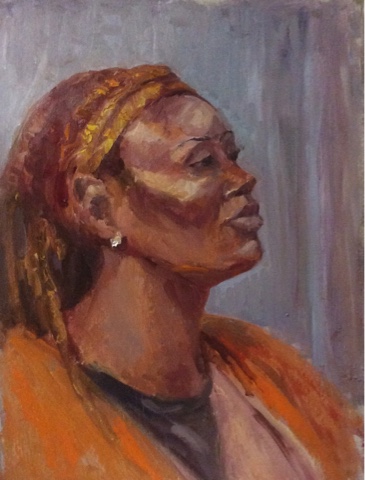 Portrait Study, oil on illustration board, 16x20
The above portrait was done at Kate Huntington's fabulous portrait group which meets Tuesday's at
Providence Picture Frame.  Such group sessions as well as solitary sessions in which still life is produced allow the artist time and mental space for experimental methods.
Posted by tom martino at 10:49 AM No comments:

The term "wintry mix" warns us of some adverse travel and painting conditions here in southern New England--enough to keep some painters home-bound, neglecting plein-air skills.  Most of us plein-air painters are fortunate, however, to be near groups which allow us to maintain our drawing and painting skill levels.-- allowing us to be ready when outside conditions improve.  In particular, there are "open studio" , still life, portrait and figure groups available.  One outstanding group I have participated with is that run by the talented Providence-based artist, Kate Huntington now housed at Providence Picture Frame. 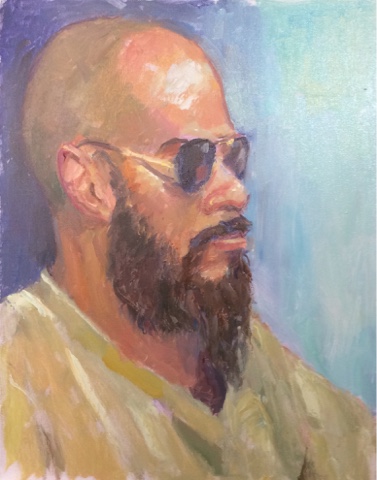 The Cape Verdean, oil on canvas, 14x18
The portrait above was done at Kate's portrait session which takes place 2-5 P M each Tuesday at
Providence Picture Frame.  The one below is another example of the kind of portrait that can be done in the three hour period: 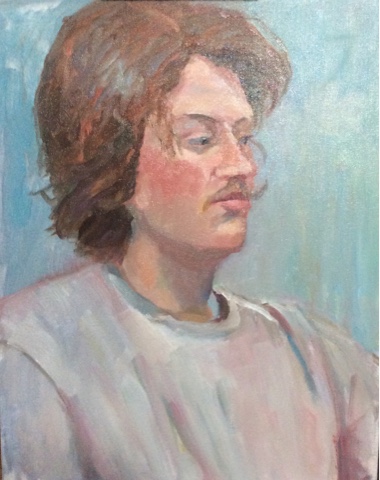 Jacob, oil on canvas, 14x18
Another session run by Kate is the Figure Sketching group which meets from 2-5 PM each Thursday at the same place as the Portrait Session.  Here's a recent example of one of my figurative studies: 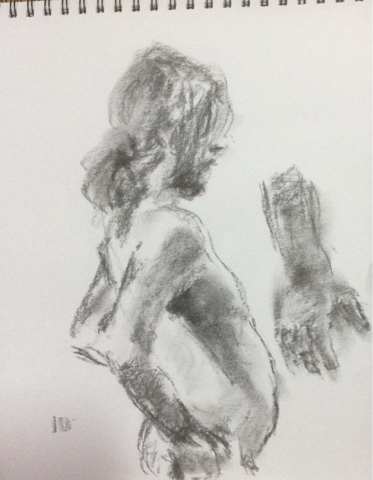 Charcoal on white paper
Another portrait session of interest is run by Ray Finelli, who teaches portraiture at the Providence Art Club.  The charcoal sketch below was done at a session coordinated by Ray at the North Kingstown Senior Center.  This session runs weekly, 10 AM-12PM, on Tuesdays. 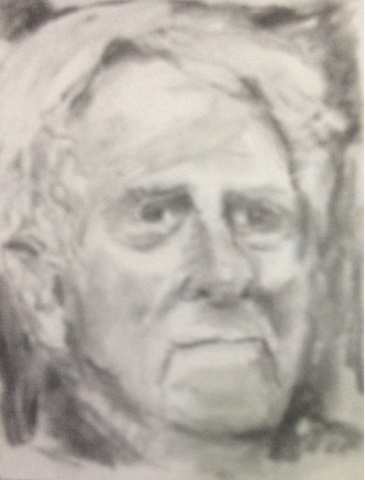 Richard, charcoal on newsprint
So there is no excuse for the serious plein-air artist.  We have plenty of opportunity for practice.  The oil sketches shown below were also done over the last week (between bad-weather days!): 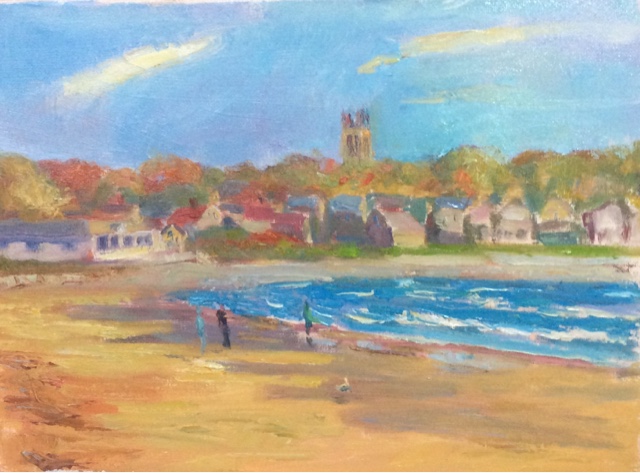 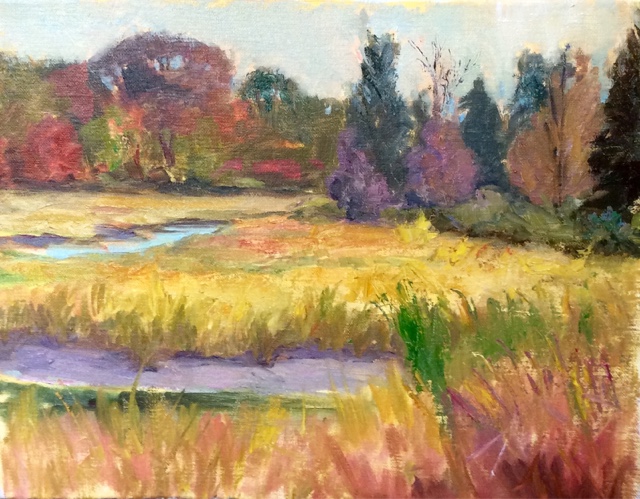 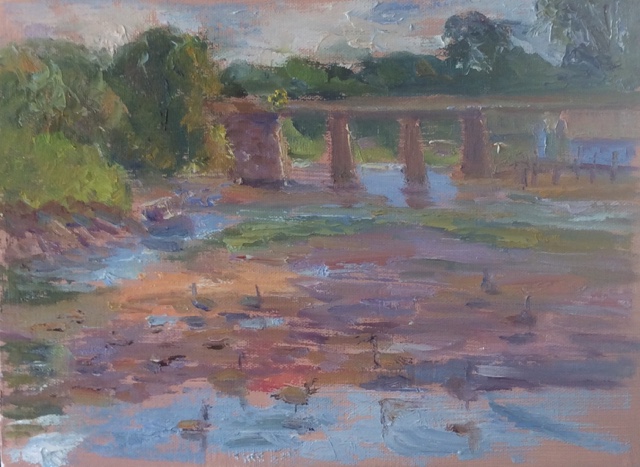 Trestle Bridge, Arnold's Neck, oil on canvas, 9x12
This Post intends to introduce various aspects of  painting problems and steps towards their solution.  Those enrolled in my current course, "Gesture and Color in Impressionist Painting" may benefit from some of the discussion and examples here.
The first example is the plein-air sketch above.  I have always been fascinated with the view of this trestle bridge which sees the Acela scream over it.  The view has considerable interest for me because of the small cove at Arnold's Neck (Warwick, RI) which is most interesting at low tide, when the purplish mud appears and numerous waterfowl gather.  In this particular sketch I attempted to resolve issues from many a prior sketch.  Some of the problems of the earlier sketches were compositional-- I centered the bridge on the canvas, for example. Most of the others showed a scattered focus among the interesting elements in the outdoor scene before me.  Was the painting about the waterfowl, a small white boat docked nearby, a couple of buildings on the shore, the low tide itself, or the bridge itself?.  Clearly, I needed to work on the very first phase of plein-air painting:  scene selection and simplification.  From the painted sketch above, there is still more work to be done. In this case, shaping the muddy areas including puddles to lead the eye more effectively to the area of interest--the bridge.  Additionally, the waterfowl can be dispersed in such a way as to again lead the eye.
Another approach is to begin a new sketch which de-emphasizes the foreground low tide area.  One such approach is the following which produces more of a sky painting: 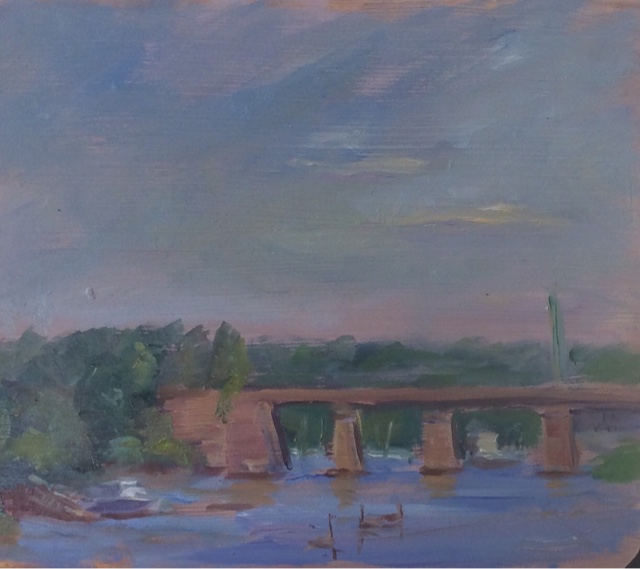 Trestle Bridge at Arnold's Neck, oil on wood, 8x10
During the past week I decided to do tree studies , a subject that becomes increasingly important as autumn begins and even more so as the transition to winter begins.  This first oil sketch, done at Goddard Park in Warwick, RI, had as its stars two trees, one a type of cedar and the one behind it possibly a beech tree: 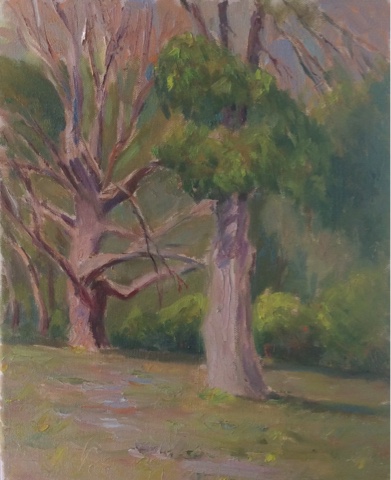 Tree Study, oil on canvas, 11x14
The trees were indeed on a sloping hill.  In the grass I suggested a path that wound between the two trees.  The path was an afterthought, an answer to the question of how one could turn a study into a painting.  I worked this idea into a second sketch done a couple of days ago: 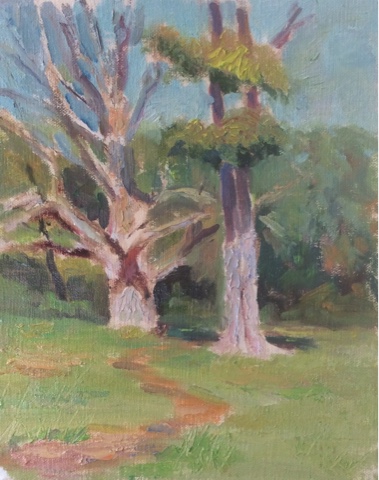 Tree Study (no. 2), oil on linen, 8x10
That sketch needs more work in defining middle ground and background elements, but does suggest that this could become an interesting painting with the suggestion of two or three figures in the middle ground.
As a note in technique, both the tree studies were begun with an acrylic underpainting in brown and white to lock in values.
Posted by tom martino at 10:13 AM No comments: 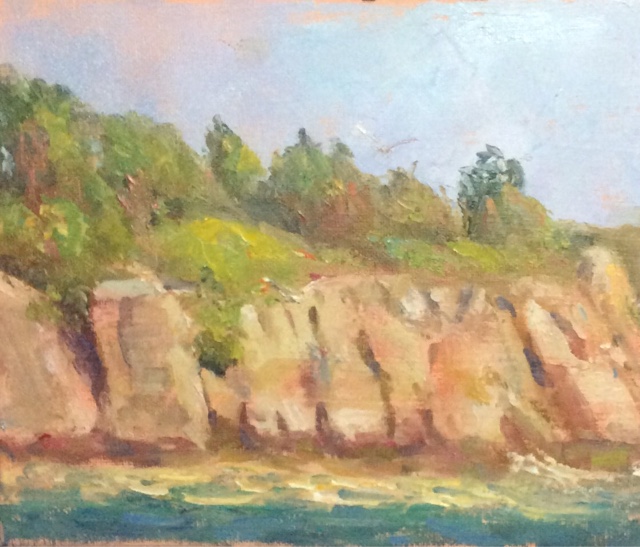 Ft. Wetherill Fjord, oil on canvas, 9x12
The painting of the fjord in Ft. Wetherill was an attempt to outdo my past approaches to the same subject.  This time I paid more attention to the gestural lines in the subject and avoided leaving the dry taste of a rocky cliff study.  The tree line is played against the suggested cliff rock line.  This, of course, is just a first jotting down.  You can see the faint intimation of a gull.  I may add one or two more to break up harsh lines and add the sparkle of life to this sketch. 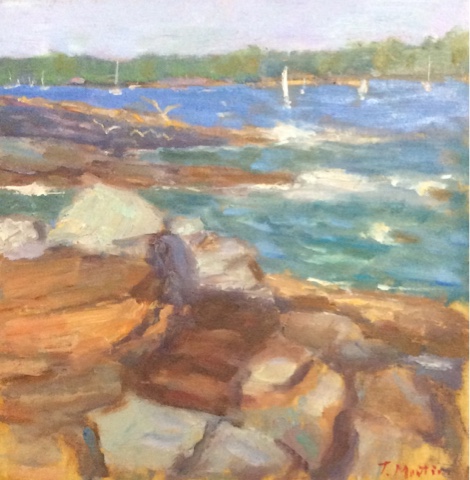 East Passage, oil on board, 10x10
The painting above (East Passage) is also of a subject I often visit.  It shows the view toward Newport from the rocky eastern shore of Beavertail in Jamestown, RI.  About 85% of this painting was done plein air and the rest , mainly corrections and some minor enhancements, was completed on the easel indoors.  The late afternoon light on this eastern shore does not last long, but is beautifully mellow. 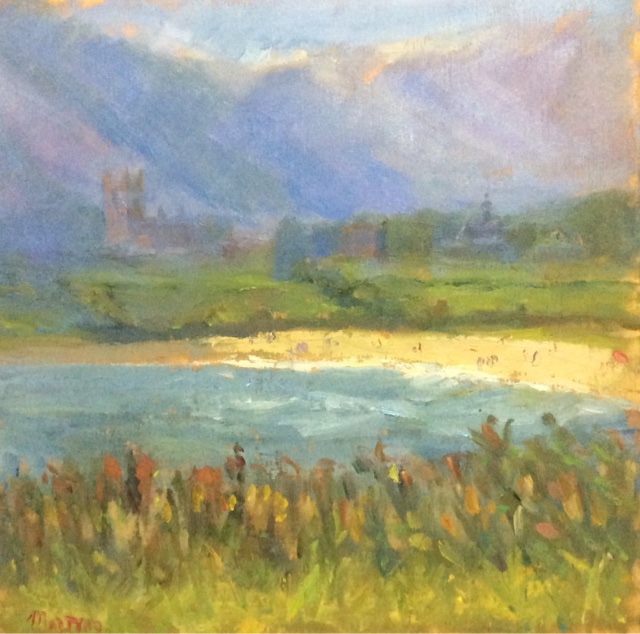 Second Beach from Sachuest Point, oil on board, 10x10
One of the strangest days on which I have painted, with fog rolling in and out and a dreary sky that let enough light escape to illuminate the beach!  I feel I should have had at least two other surfaces available.  One for clear conditions and one for obscure conditions!  But I was determined to capture that magical first impression in which St. Georges became the ghost of an ancient castle in Scotland! 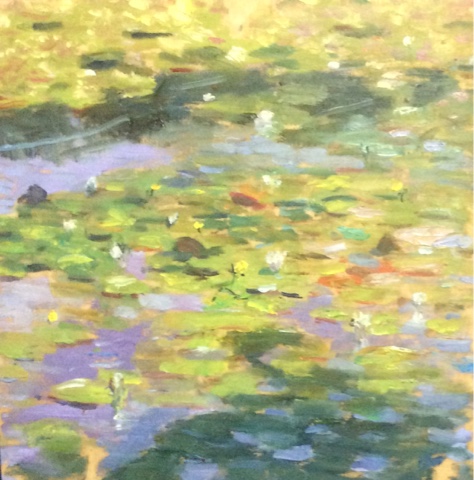 At Belleville Pond, oil on wood, 10x10
This pond in North Kingstown is rich in its summer finery of water lily and blossoms.  Moreover, the afternoon light allowed the shade of a tree on the bank to contribute to foreground interest. 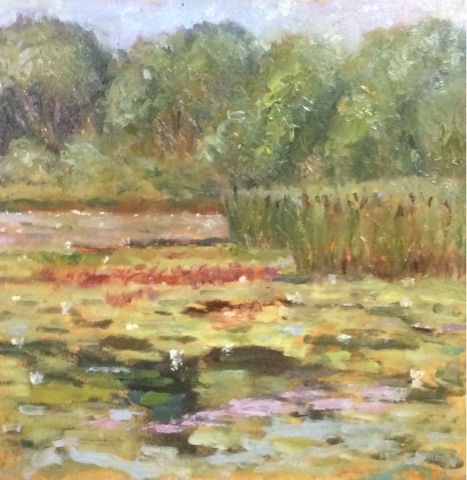 Pond by the Great Swamp, oil on wood, 10x10
The pond painting above was sketched in an area bordering Kingston and Wakefield, RI.  The day was cloudy and dreary, but I was attracted by the cattails and spare color.   To me a summer pond is no less beautiful on a cloudy day than on a sunny one!
The above paintings may appear at "Art Al Fresco", an art festival run by the Bristol Art Museum.  Small artworks will be hung along the fence at Linden Place, July 31(Sunday), 10AM- 5PM.  See you there?
Posted by tom martino at 12:01 PM No comments:

When the weather turns seasonably cold, I tend to work (plein air) earlier in the afternoon, although I still prefer the more mellow light of late afternoon.  Less hardy than I used to be, I limit my exposure to the cold air.  One advantage to this self-pampering is that I must work faster--and "work" to an oil painter includes observation as well as mark-making with a brush or palette knife.  Yes, I occasionally bring my iPad along to record the selected subject, but the inspiration is often suggested by less colorful media such as pencil or even pen and ink.  As mentioned in other posts, I also paint portraits as well as till life oil sketches.  Below are some images of recent work.  Again, I realize these sketches demand more finish--another possible winter project! 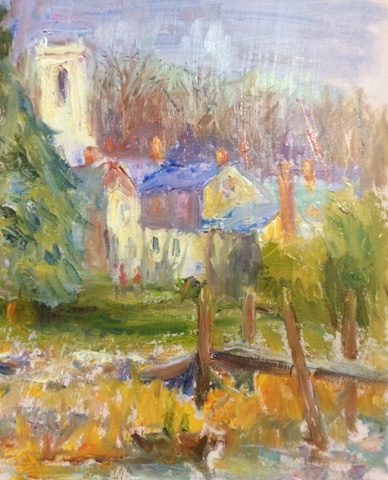 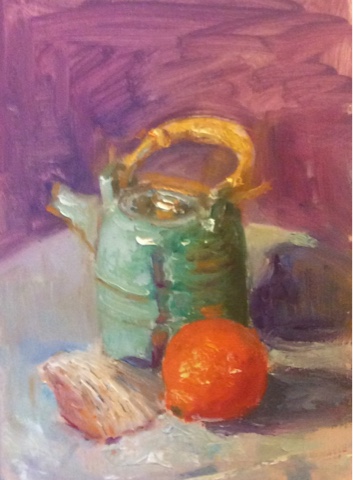 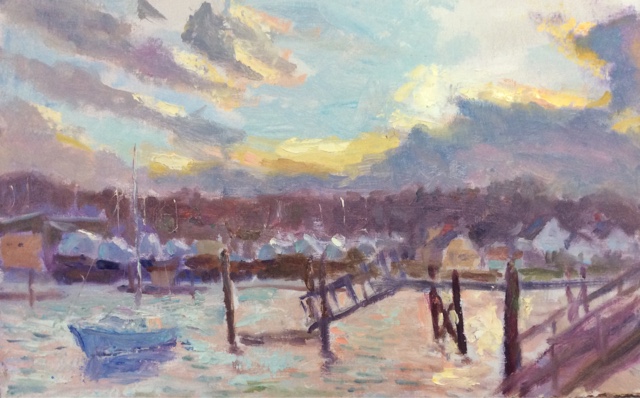 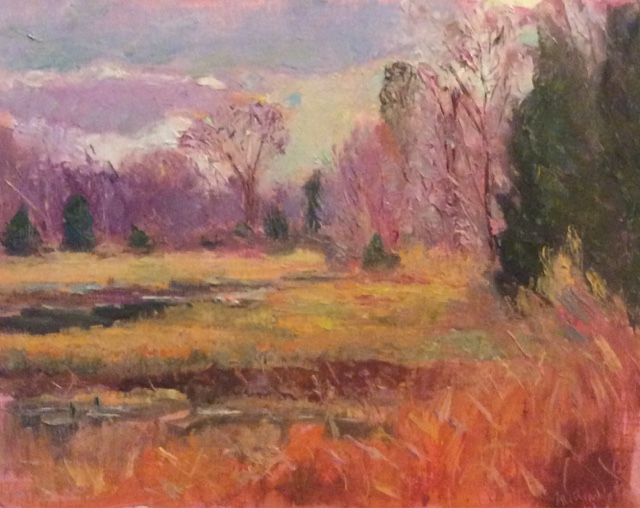 tom martino
I love impressionist painting but there is also the influence of the Tonalist School in my work. I love the outdoors, especially the coastline, beach, rocks, and waves. I believe in a life beyond the commercial saturation of society,and I find life without poetry and music unliveable. I love the paintings of Sorolla, Sargent, and Metcalf; the music of Rachmaninov, Borodin, and Bizet; and poems of Rumi and other Sufis.